We've been out of the country over Easter, and one of the countries our family visited was Sri Lanka.
We've been to Asia a few times in the past, but only to places like Hong Kong and Singapore, during stopovers on long-haul flights. Sri Lanka was a new experience for us.
Driving through Colombo, we saw how genuinely poor people live; crowded into makeshift wooden shelters that most people in the UK would be ashamed to have as a garden shed.

When we travelled south to our villa, just out of Galle, people seemed slightly better off. The walls of their houses were made of concrete blocks, and the roofs looked at least waterproof. There still seemed to be too many people to possibly live in one small room, but the houses looked solid, permanent.
In the area we stayed in, there were a lot of ruined buildings especially on the coast road. Of course these were remnants of the 2004 Tsunami, in which at least 30 000 people died. 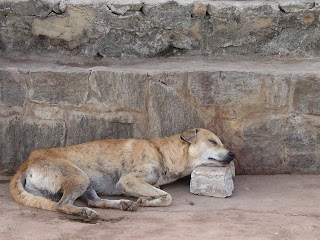 Sri Lanka has many stray dogs. We did see some dogs wearing collars, but if they were pets they seemed to spend a lot of time wandering along the roads with all the rest.
Most of the dogs we saw were obviously unowned, with signs of skin disease and lameness but there were very few that looked like walking skeletons. Most seem to get enough to eat by hanging around restaurants, hotels, villages and temples. 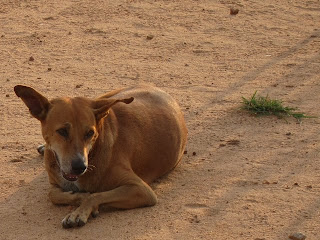 Dogs in Sri Lanka appear to have a lot more road sense than dogs in the UK. I saw many of them check the road for vehicles before stepping out into the traffic but I guess they learn this the hard way. 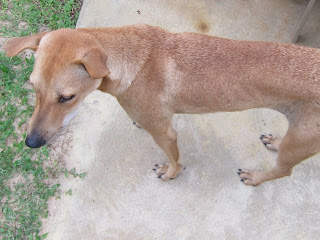 And you'll see by my photos, that a lot of these dogs look similar. The ones we saw were all the size of small Labradors and most had a short coat in some shade of brown.We did see a couple of German Shepherds at a guest house, but I'm pretty sure they must have been imported from somewhere. And we did see one smaller dog, living on an island that had a black and white shaggy coat; so was maybe a collie cross of some kind? No one spoke enough English to satisfy my curiosity, so I'll just have keep wondering. 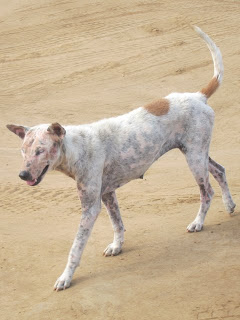 I asked our driver what people did if they found an ill or injured dog and it seems ill dogs are avoided due to the risk of rabies. He did mention the possibility of taking an injured one to a vet, but most vets specialise in farm animals, so are mainly concerned with production. in most areas, there simply isn't usually the money available for specialised equipment or drugs for companion animals.

Many people in the UK consider their pets a right, not a luxury, but a visit to a less wealthy country should be able to convince most reasonable people otherwise. We didn't witness any animal cruelty on our travels, but it's obvious that people in Sri Lanka struggle to provide their families with the basic necessities of life, so the needs of animals such as dogs must be way down that list.

The Visiting Vet
My name is Jacq Mitchell. I am a mum of four so started The Visiting Vet 7 years ago to fit around my home life, and yours. I come to your house, at a time convenient for you, to do routine vaccinations, health checks, minor illness and injury consultations and euthanasias. It's usually less stressful for everyone!